Church of the Rosary | Historic Center of Maratea

The Church of Our Lady of Rosary

The Church of Our Lady of the Rosary or better than Mary Most Holy of the Rosary, was built in 1575 with the contribution of the entire population of Maratea, and was originally dedicated to St. Mary of Consolation, then dedicated to Our Lady of Mercy, the name now disappeared from popular use.
It is part of a large monastery, at the beginning occupied by the Minori Osservanti, today the site of the Visitandine convent and the renowned De Pino-Matrone-Iannini institute.
During the Napoleonic siege of 1806, the convent was used as headquarters by the French for military operations against Maratea Castello. 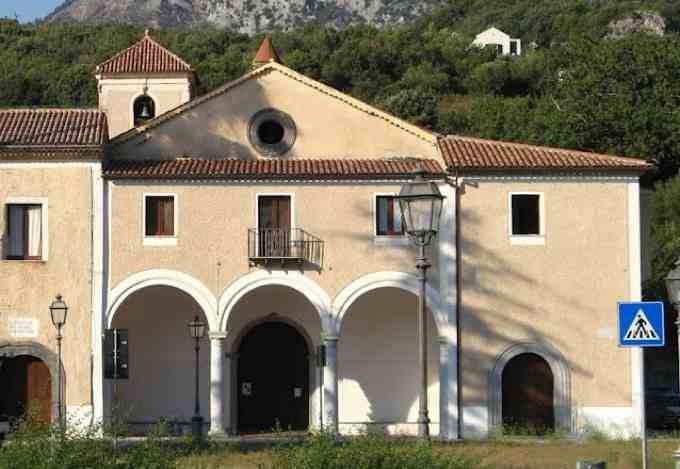 The interior of the church is the richest of the Marateoti temples: the large single nave is adorned with playful bas-reliefs, depicting 100 faces of angels and other jutting motifs, a patient work of the friars of the convent in the 18th century.
Starting from the bottom of the left wall, we find the painting by S. Crispino and S. Crispiniano, by an unknown 18th century artist, a Madonna del Soccorso, of the same period, surmounted by a small and beautiful Addolorata dated 1730 and attributed to Andrea D'Este.
Very beautiful is the delicate statue of the Madonna del Carmine in alabaster of 1695.
On the opposite side is the chapel of the Madonna of the Mysteries of the Rosary, valuable 18th century canvas, flanked by the Porziuncola di S. Francesco painted by Giovanni Trombadore in 1678, the Madonna with saints by Matteo Simonelli of the eighteenth century and the sculpture of St. Pasquale Baylon of the seventeenth century.
The dome is decorated with frescoes by Angelo Galtieri of 1720, representing the Evangelists.
At the center of the vault stands the canvas of the Assumption, painted by Gaetano

Visit The Church of Our Lady of Rosary

To reach the Church by car:
Address to be entered on the navigator: Largo Monastero, 1 MARATEA
Parking in front of the church.
BASILICA SANTUARIO PONTIFICIO DI SAN BIAGIO