The Mother Church of Santa Maria Maggiore is the parish church of Maratea Borgo, the historic center of the municipality, since 1434.
It has long been used mainly in the summer months, it is nestled between picturesque alleys and a triangular square, and with its shape and its bell tower is the architectural element of prominent urban center.

The ancient nucleus of the church dates back to the XII-XIV century, and the remains of which are still visible through a window placed in the middle of the nave of the current church, built instead in 1505 by this Greek Mercury.
It is tradition that the dedication of the church is the repetition of that of the ancient church of S. Maria al Castello, no longer existing, from which the mother church would also inherit many objects and furnishings, such as the statue of the Assumption, with a base dated 1646, placed in the central niche of the choir. 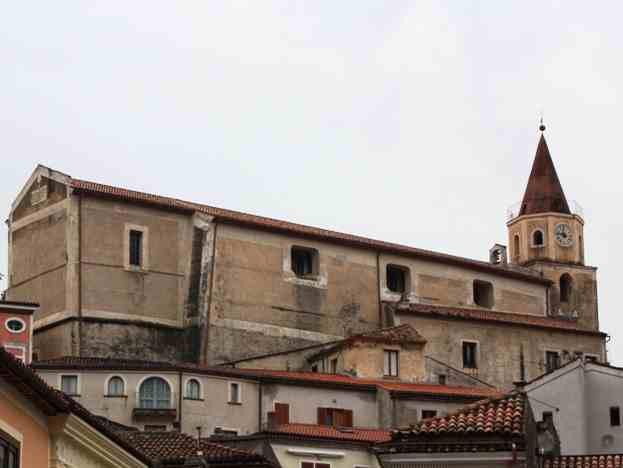 The works of art of the Church

The interior of the Mother Church of Maratea, decorated in Baroque style in the eighteenth century, was enlarged in the same period with the addition of a tower room, today constituting the presbytery and the church choir.
In the nave you can admire a beautiful painting of the Baptism of Christ, one of the Immaculate dated 1690, a Nativity with St. Stephen and St. Catherine of A. M. Ricciardi of the eighteenth century and a Trinity signed by Francesco Oliva da Mormanno in 1760.
These are accompanied by valuable wooden sculptures, including a "Ecce Homo" of the fifteenth century and the choir's choir, finished by Marco de Sanctis in 1729.
At the baptismal font the statues survived the earthquake of 1857 can be seen.
The Mother Church of S. Maria Maggiore does not have a real facade, but one of its sides opens onto a triangular little square and shows two praying angels, sculpted in the fifteenth century.
On the side of the structure stands the Romanesque bell tower, rebuilt after the earthquake of 2 January 1831.

To reach the Church:
Pedestrian zone; leave the car in one of the car parks of the Historic Center and continue on foot.
BASILICA SANTUARIO PONTIFICIO DI SAN BIAGIO